Hey guys! I know I’ve been a little MIA lately, but college has been fun, eventful and everything under the sun! The need to blog and share with all of you has been eating at me and, quite frankly for the past couple of weeks, I was going through a major writers block. But I’m back and I’m ready to share with you guys!

So remember how awhile back I was on tinder for like 4 days and didn’t like it and then lived to tell the tale?

Well, let’s just say I’m back on tinder, but with a couple of cool new insights:

What I learned from the first time around

So I learned that Tinder is fun and all, but I wouldn’t completely bank on it as my primary source of meeting people. Like I’ve said before, I’m in this new chapter of my life where I’m still in the process of meeting new people, whether that be people in my classes or just people I meet in the club that I just joined. The thing is, there’s always going to be someone new that I meet every once in a while and that’s pretty cool.

For tinder and all other dating apps like it, you need to be able to find a quality about yourself and basically, market that to your intended group, whether that be guys, girls or even both! What is it that you are looking for in a person, what is it that they would want to know about you?  All of this is a matter of putting yourself out there and making yourself more approachable.

For example on my profile, I made the choice to not really write about myself. What I do instead is I have a really short, sweet and to-the-point bio, “Classy, never trashy, just a bit sassy💁🏽‍✨♀️” . Sassy is a quality that I would want to market to my intended group because who doesn’t like a girl who is quick, witty and Latina?

Another thing that I learned is this: Presentation is everything. So for all the photos I have up on the app, they’re photos that are definitely some of my best ones.

When you want to market to your intended group, you want to pick photos where it captures your genuine self.

For example, If you like being out with friends and having a good time, put up a cute photo of you with a drink. Make sure you make known who you are by putting up some photos of just yourself, followed by a couple of photos that capture you in action with friends.

What I would suggest is ask a really good friend to give you their opinion on what your best photos are.

Here are some of the photos that I have up on my profile as of right now: 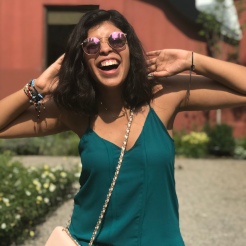 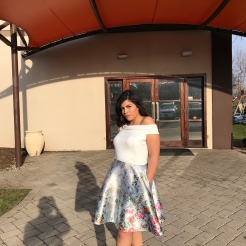 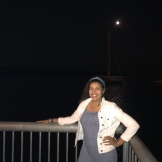 That being said, just be yourself on the app and don’t say something that’s out of your realm of knowledge. By that, I mean don’t use words or phrases you don’t know or mean, because that’s where communication and everything else in between gets a little messy. Be clear, say what you mean and mean what you say. And please, please, please do not do anything that is against your morals.

other important things to note:

How I gained clarity on the hook up culture

One day, I was walking up the stairs to get to one of my classes and I remember thinking about the reasons why I don’t see that many people my age, in relationships.

And it kinda just, hit me: College students, like myself, don’t really have time to give to another person, because of work, family obligations, school and/or other obligations whether that be to their clubs or fraternities and sororities. I mean we’re all working towards becoming better versions of ourselves, that’s not a bad thing. Not wanting a relationship right now or for the time being, is also not a bad thing either. What’s more is that some of us, don’t have the energy to devote ourselves to just one person for a period of time. And that’s okay too! We are young, for crying out loud! We don’t have it all together because we’re just starting out.

So I realized that the reason why there’s hook-up culture is because, well for lack of better words, we sometimes need to let off steam. We want all the physical components of a relationship, even if it is for a little bit, but not the emotional component. If you want to go down the casual route with someone, then tinder is your place. If after reading this you wouldn’t consider going down the casual route, then that’s fine too, but don’t judge people who choose the casual route for themselves. People can do what they want with their bodies, just as long as they’re okay with it and is within reason.

Once I defined what I wanted, it became easier to meet people and to have interesting conversations

The main question that’s asked on these dating sites is: What are you looking for on here?

Your answer could vary. Maybe you’re looking for a strictly no strings attached type of thing. Maybe you want a relationship. Maybe you’re just testing the waters. All are fine answers, but keep in mind that you need to be vocal and honest with yourself and with the person you’re talking to.

That response could go one of two ways:

I leave that up to anyone’s interpretation. At the very least, I know what I want.

Once I was able to vocalize that, it made matching and talking with people easier because I know what I want. People like it when they’re around someone who knows what they want. I was able to eliminate the baseless conversations and actually have a chance to talk to people with substance.

So on the app, I’ve come across some pretty douchey people. It’s not that they’re a flat out dick to me, but they have that douche aesthetic. Don’t waste your time on these kinds of people.

I just find it funny that they think that by just slinging around cockiness about them, they’re destined to get laid. Yeah, not happening with me.

So here are a couple of examples 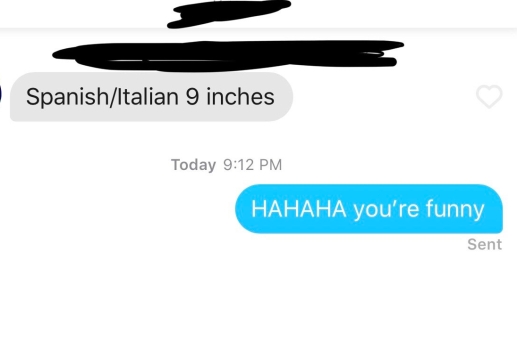 In this first photo, there’s no greeting, no compliments on my photos, just a humble brag about what this person says they are… I don’t know about y’all, but I was told to laugh at anyone who says they’re nine inches. MOVING ONNN…

I decided to pull out the sassy card on this one and then this person proceeded to ask me for my snapchat. I used to give out my snapchat freely, but I feel that if you’re just talking for the first time, it’s best to go by phone number. Since tinder doesn’t allow you to send photos, I see the need in resorting to other means of sending photos and/or videos. But  the last thing anyone wants are unsolicited nudes…

This one’s actually pretty clever… until I received another message with that same pick up line. I talked to them for a bit, but like I said before, I’d rather talk to someone who has substance to them, not someone who just wants to send nudes and text me whenever they feel like it.

Granted, I’ve had some pretty good conversations with some people on here. I hope this helps y’all and educates you on the do’s and don’ts of meeting online. If you have things that I haven’t mentioned here, feel free to drop a comment below!